On Wednesday, November 10th, the Bureau of Labor Statistics (BLS) released the monthly numbers for Headline CPI for the month of October 2021. Those figures came in at 6.22%  year-over-year. This was the highest print to be released in 30 years. On a two year lookback, CPI increased 3.7%. Given the inconsistencies around 2020 figures due to COVID, it can be helpful to compare statistics posted in 2021 to 2019 which represents a more normalized economy. 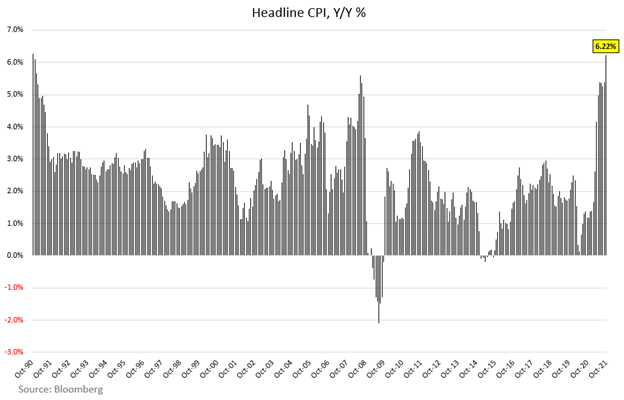 In the investment world, there are two seemingly staunch camps on the inflationary debate. One camp argues that inflation is here to stay for the foreseeable future, which could mean one to two years. The other camp, including the Federal Reserve, argues that inflation is transitory and we will return to more normalized levels of inflation sooner than later. For the past 12 months, we have been in the "inflation is going to be here for longer" camp and it has paid handsomely. Our preferred sector exposures in our portfolio have been energy, financials and industrials, which have posted returns of 76.65%, 49.61% and 26.12%. For reference the S&P 500 is up 32.84% over the past 12 months.

Below is a chart highlighting the inflationary pressures that we continue to see in the economy: 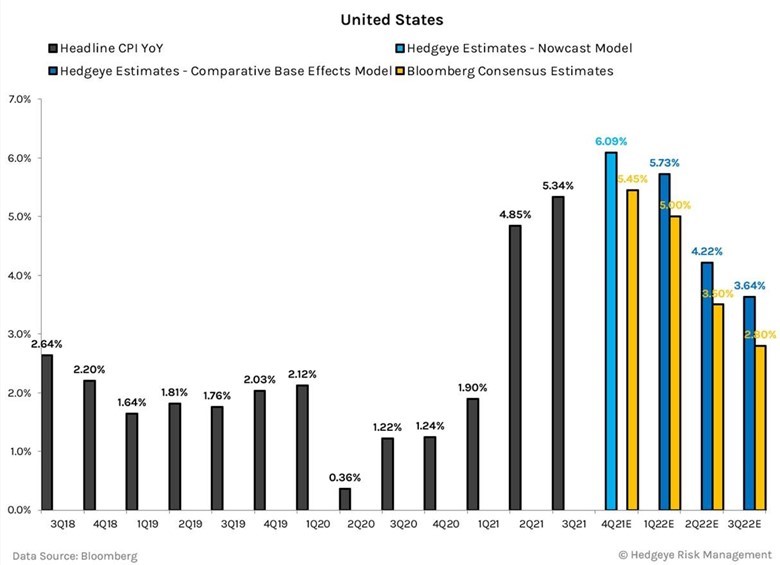 Our friends at Hedgeye Risk Management have been spot on in modeling where inflation is headed over the next 3-6 months going back to the middle of 2020. Starting in the 3rd quarter of 2020, you start to see the pace of growth in inflation accelerate, culminating with inflation peaking in the 4th quarter of 2021, based on their estimates. What's interesting is that while the pace of the growth of inflation slows, the levels of inflation are still higher than any point in the past 3 years.

The deflationary camp argues that without wage inflation, you won't really see inflationary pressures persist, along with the known supply chain issues and commodity prices that have skyrocketed over the past 18 months. That being said, when the issues seem to continue to persist, longer than most "experts" anticipated (the Federal Reserve included), you have to call out the ability of the experts to forecast not only the outlook for inflation, which was wrong to begin with. Quite frankly, you have to call into question their ability to forecast anything at all correctly!

As you likely can deduce, our stance is that with inflation persistently higher than trend, the sectors that we have favored in the past will be the same ones we continue to like over the next several quarters.

Our greater concern is the trajectory of growth coming out of the depths of the crisis in 2020 that made the growth numbers in 2021 look so great. Base effects coupled with reduced amounts of government stimulus could be headwinds for the economy, especially in an environment where we still have 10 million job openings and 8 million people looking for work.

Gordon Asset Management, LLC is a registered investment adviser.  Information presented is for educational purposes only and does not intend to make an offer or solicitation for the sale or purchase of any specific securities, investments, or investment strategies.  Investments involve risk and, unless otherwise stated, are not guaranteed.  Be sure to first consult with a qualified financial adviser and/or tax professional before implementing any strategy discussed herein. Past performance is not indicative of future performance.

Gordon Asset Management, LLC may discuss and display, charts, graphs, formulas and stock picks which are not intended to be used by themselves to determine which securities to buy or sell, or when to buy or sell them. Such charts and graphs offer limited information and should not be used on their own to make investment decisions. Consultation with a licensed financial professional is strongly suggested.